Does the Combine Matter? Does the Combine Matter?

While it’s a little late, here’s a breakdown of how predictive combine performances are of success in the NFL, from our friends at the Sports Analysis Collective. We’ll follow up with part two of the article tomorrow afternoon.

It’s a simple question.  Does the combine actually matter?  Or it is just an over-hyped meat market?  In answering these questions, there’s two ways we could look at things:  1. Does performance at the combine relate to future performance in the NFL?  2. Even if the first answer is no, does performance at the combine correlate to where a player will be drafted?  While it’s probably not too surprising that the answer to the second question is yes, believe it or not, the answer to the first question is yes as well.  In a series of articles, I’ll show you why.  And I’ll do so in the best, most unbiased way possible:  using data and math.  But don’t click away yet!  There will be plenty of pretty graphs and I’ll save most of the nitty-gritty details for separate sections.  Before I get into it, here is a list of the major points I’ll be making:

Alright, now let’s start to dig in.  The goal is:  given a player’s combine performance, predict how good he will be NFL, as well as where he will go in the draft.  How do we quantify NFL success?  Ideally we’d just have one number that combines all aspects of a player’s performance.  The Approximate Value (AV), created by Pro Football Reference founder Doug Drinen, is a stat that attempts to do this.  It consists of a formula for each position that and is calculated on a yearly basis. The next question becomes, over what period should we calculate the AV?  On one hand, you want to take in account the entire career of a player to fully reflect how valuable they were.  But this leads to some obvious problems.  First off, it would make it very hard to compare older players, who have had more years to accumulate AV, to younger players.  Second, it can be counterproductive in terms of our main goal.  We don’t want a journeyman, who happens to bounce around different teams and accumulate AV over time to be deemed better than a star who happens to have a freak injury and retires after 3 years (e.g. Bo Jackson).  What we really want to know from the combine is, “Does he have what it takes to make it in the NFL?” or “Will his freakish abilities actually translate to the field?”  With this in mind, I propose that what we should look at the total AV over a player’s first three years.  This is what he hope to be able to predict when looking at combine numbers.

Now, obviously looking at the first three years has some drawbacks.  Particularly for QB’s, you might argue that players need time to develop and you won’t know their value until later down the line.  While this is a valid argument, the average career length is 3.3 years and by the end of the third year, you generally are able to say if a player has ‘made it’ or not.  Extending the evaluation period only adds more noise, which you can’t predict, and gives you fewer and fewer players to look at.  As a GM, you might as well stick with what you can predict and leave the freak injuries and career epiphanies to Vegas.

Okay, all that to say that I’ll be trying to predict the 3 year Approximate Value (3YAV).  I’ll look at combine data from 2000 to 2011, which I got from nflcombineresults.com.  The first step in any data trek should be to look at the raw data.  Below I show some scatter plots of the 3YAV vs. combine measurements, grouped by position.  The first plot is for the forty yard dash for offensive guards.  Each dot represents a player and the coordinate gives his forty time and subsequent 3YAV. 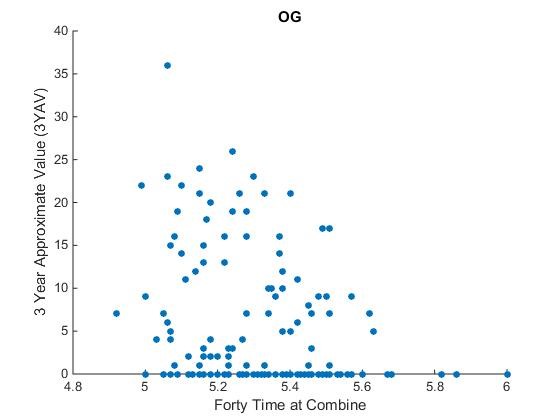 While there is tons of variation, it’s cool to see a pattern that faster guards tended to have more NFL success.  Compare this to the bench press: 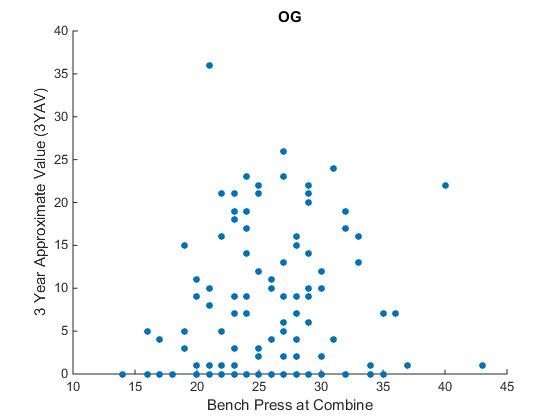 Any trend looks pretty minimal to me.  When you think of big, beefy OG, the last thing you probably think is that their speed is more important than their strength (although it’s very debatable whether max reps at 225 actually measures strength at all…).  All this is very qualitative now, but we’ll quantify it later.

Below are a bunch of other interesting relationships. 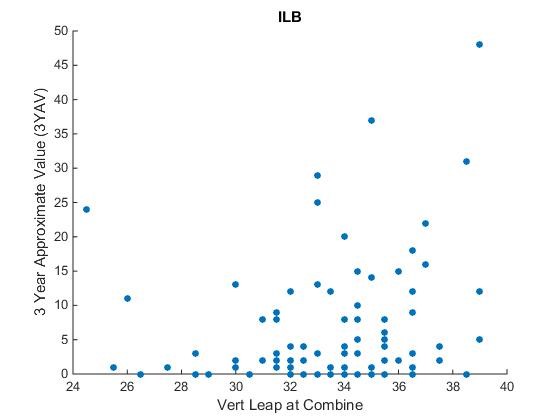 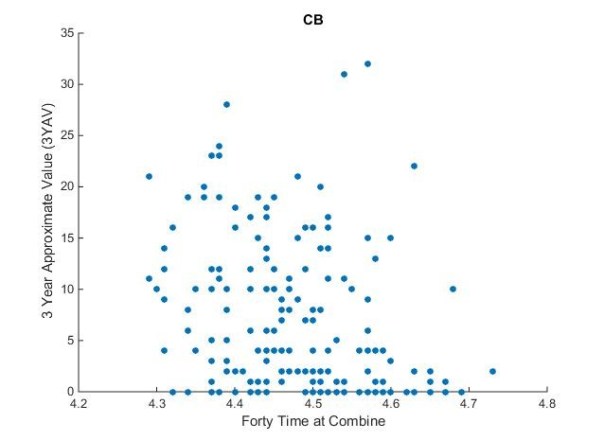 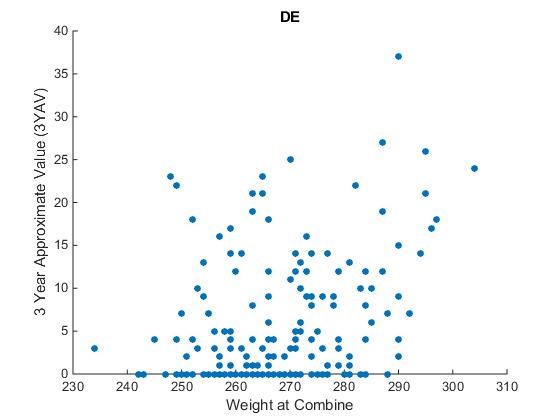 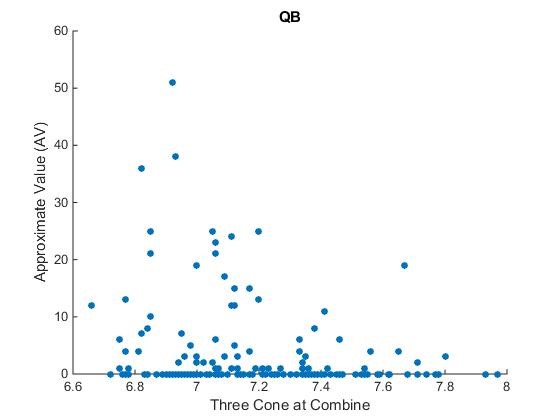