A few years ago a Bengals team that won the division and entered the playoffs would of been considered a major success.

Unfortunately, it is not “a few years ago”. It is the here an now, and the Bengals fans should be feeling a bit of frustration with their Cincinnati team. Losing in the wild card round in the two previous years in a row, a division title and a home playoff game seemed to be exactly what was needed. Sadly though, that first round performance against the Chargers was just dreadful, even compared to the previous WC loses.

The good thing is, the roster is still young and talented, but as we all know windows in the NFL get smaller and close faster than we’d like to think. Even with all it’s talent, the Bengals will still be a team entering the 2014 season as an oxymoron; A defending division champ with an inferiority complex to most of the teams in the AFC North.

Lets take a look at the Bengals 2013 retrospective:

Beating up on a team as inconsistent as the Jets were last season might not seem like a highlight for the year, so before you scoff at my selection consider this:

1. The Jets surprised all the experts and were actually a decent team in 2013.

2. Even if you consider the Jets an NFL doormat, 40 point wins don’t come very often in todays NFL.

The Bengals have had their share of tough defensive wins over the last few seasons, but almost dropping a 50 on a team that has a very legit defense is something to be proud of. Marvin Jones managed 4 touchdowns in that game, which by the way is quadruple the amount he score the previous season.

The Chargers game plan for the beating the Bengals in the playoffs seemed pretty simple: Get out of the way and let the Bengals implode.

I mean really, Phillip Rivers only had 128 passing yards, about 200 yards less than Andy Dalton had. In total the Bengals out gained the Chargers 439 to 318 and still somehow found a way to lose the game. The key of course came out of the turnovers, the Bengals fumbled three times (Lost Two) and Andy Dalton threw in a few interceptions for good measure. This kind of loss makes people wonder if Andy Dalton hit his ceiling as a quarterback. 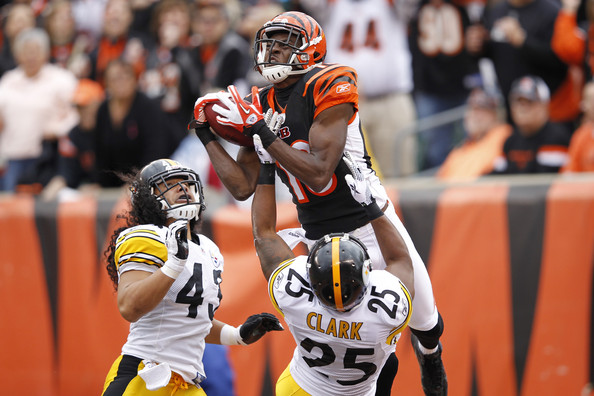 A.J. Green started all 16 games and had over 1400 yards receiving with 11 touchdowns. At this point any defense that chooses to single cover Green is really not up to date on his talent. Even if you double cover the guy, he has a knack of jumping anyone and coming down with the ball. The only way to stop this guy will be with a “Bump and Punch”, kind f like a “bump and run” but instead you just punch him in the stomach and hope he is just to scared to jump for the ball.

I know i was hard on Andy Dalton but in truth, he has taken the Bengals to the playoffs in three straight seasons. He has undoubtedly exceeded expectations of the fans and the Bengal front office. With that said, in todays day and age, most teams develop some form of ADD when dealing with the quarterback position, so is his spot secure for the long term? I for one am not sure. Another 20 interception season will force the Bengals to start looking for a replacement, but unless there is a project type QB available late in the draft i wouldn’t consider it for this season.

The Bengals are filled with young players and the roster is deep, going after the best player available will be the way to go for them in April. In free agency however, they need to look at veteran depth at linebacker, defensive back, and offensive line. No need for big splashes this off-season.

Way too early prediction for 2014

The Bengals are positioned well moving forward this season. The Steelers and Ravens are not going to be bad teams but they have lost their luster the last couple of seasons. Another tiny step forwards will occur and i can see them going 12-4 and winning the AFC North for the second season in a row. I can even see a 2014 Bengals – Panthers Super Bowl (Reason for that will be in an upcoming article).