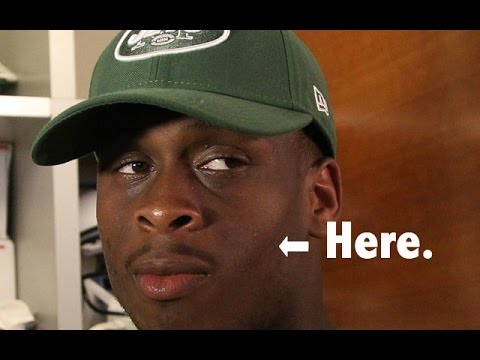 Punch in the Face Overreaction

Well it’s the dog days of training camp.  Malcom Butler looks like he is a combination of Deion Sanders, Ronnie Lott and Rod Woodson.  The Bills defense is a bigger, better version of the ’85 Bears and Ryan Tannehill is sure to take that next step towards super-stardom.  And the Jets had turned over a new leaf and were poised to follow new Head Coach Todd Bowles to new heights.  Then yesterday happened and the veil was pulled back to reveal the same, stinky, smelly garbage of a franchise that we’ve all grown to loathe when former 6th round pick and reserve linebacker Ik Enemkpali cold cocked “QB” Geno Smith in the jaw, breaking said (glass) jaw in two places, sending Geno to surgery and leaving him out of action for about 6-10 weeks.  Ahh Jet fans, even Raider fans are laughing at you.  I mean come on, what a freaking joke this organization is; look at it this way, not even Jay Cutler has taken a punch to the face from one of his teammates.

I’m sure many Jet fans spent yesterday afternoon rationalizing this whole incident to themselves by saying that this Ik kid was unstable; he was even convicted of beating up a cop prior to the draft in 2014 (so of course the Jets would take him because you know, what better place for a kid with rage issues?).  He no doubt was going through a rage episode and anyone that got in his way was going to be on the receiving end of a punch to the face.  Err, maybe not.  It turns out that Geno was refusing to pay a $600 debt owed to Ik for plane tickets and limo service that Geno didn’t use.  Yup, that’s the Jets in a nutshell: a guy that is scheduled to make nearly a million and a half dollars this year refuses to pay back a relatively small debt to a guy that was scheduled to make just over five hundred grand.

On the plus side, the Jets got better when Geno’s jaw exploded like an egg in a microwave.  We all know that Geno sucks at football and Ryan Fitzpatrick is both smarter and a better QB than he is, so it’s possible that Todd Bowles just got real lucky.  There is even a rumor flying around that Bowles learned about the delinquent debt and offered Ik $800 to take Geno out…

Well it’s good to know that the Jets are still the Jets and now that we’ve put a foot back into reality I think it’s OK to speculate that the Bills, Pats and Dolphins will probably be who they are so the Bills are sure to let their fans down, the Dolphins will collapse in the final weeks of the regular season and the Pats will easily win the division, reach the AFC Championship game (or possibly the Super Bowl) and lose because they can’t play defense.