What are the Jets chances for a WC?

What are the Jets chances for a WC?

A Wild Card Spot for the Jets?

The Jets, fresh off a very satisfying win over the high-powered Saints, hit the bye week full of confidence. Jet fans are now expecting big things with a manageable second half schedule, but let’s put this all into perspective.
The Jets have been wildly inconsistent this season. They have not been able to win two consecutive games since late 2011. This season with a rookie QB, this inconsistency has to be expected though. It is clear, that when Geno plays well, the team plays well, and when Geno has a bad game, the team struggles. This is all part of having a rookie QB under center.

The Saints game however, gave a major reason for optimism, even with the roller coaster that has so far been the Jets season. The Saint game showed flashbacks of the Jets 2009 season when a strong running game, smash mouth football and a top defenses can win games while having their rookie QB just manage the game and not make mistakes. 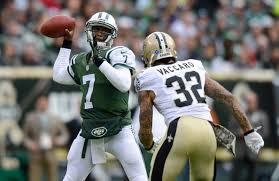 Geno Sminth and the NYJ vs. NO Saints

Geno in the Saints game, only had 19 pass attempts, but the reason was more than just taking the ball out of his hands because he is a rookie, it was due to a severely depleted WR core. The Jets were missing Cumberland, Winslow, Holmes and Kerley for most of the game as he was injured. They had new faces at wr that were not on the team when the season began, so the chemistry was a big concern.  As the Jets get back the majority of their Wrs/TEs back after the bye, Geno will be more involved in the passing game, but still, the Jets formula will be ground and pound and a nasty defense. With Geno gaining more experience as the season progresses, the offense has the potential to be more than just adequate and with a top defense, a playoff spot is very possible.

There is still almost half a season of football to play, and while the Jets have been inconsistent, they have an identity now and are playing to their strengths as their young rookie is gaining valuable experience. It is still very possible that with a rookie QB, that there could be more ups and downs, but based on a manageable second half schedule, in which the Jets don’t have to face a top 14 offense and that will cover up most of their secondary’s shortcomings, the defense will be dominating. With that being said, the Jets have as good a chance as any WC contenders, for a post season. The Jets do face four good defenses in the second half, but all in all; the Jets second half schedule is very favorable and the team is getting healthy at the right time.

Jet fans have to be extremely happy at the bye. Before the season started, many were predicting the Jets to win only 3 or 4 games and a have average power ranking of 28. While it would not be realistic to think that the Jets are a SB contender now with a team in a rebuild mode and with a rookie QB, they have enough talent to make it real interesting down the stretch. I think any Jet fan would have signed up for this at the start of the season. With the future looking bright in terms of the Jets cap situation and draft picks for 2014, the new direction provided by John Idzik, and the “new” Rex Ryan who is more professional and relaxed than ever, the Jet fans have reason for hope, as the circus has been sent packing. A new Jets team is in town and on the move!  So yes, I do think the Jets chances for a post season are better than average, but they have to pick up where they left off after the bye and show some consistency.