Even with all the internal turmoil, all the missed opportunities, the overspending for poor play, the Miami Dolphins still managed to last the whole season with playoff hopes alive. All they had to do was beat those pesky New York Jets one last time and they were in.

But, if there is one team that knows how to shoot themselves in the foot and do it in spectacular fashion to a worse divisional team, it is the Miami Dolphins. 2013 was meant to be the beginning of something great. In week 15, at 7-6, the Dolphins were leading the pack on a very mediocre AFC East. They had perhaps the biggest test when they faced the division leading New England Patriots.

After a few weeks of their young receivers struggling, they hit their stride riding high on a three game streak. The Dolphins struggled in the middle of the season with plenty of inconsistency, but managed impressive back to back wins against the Jets and Steelers. The Dolphins trailed the entire game but tied it up with a field goal in the 3rd and a go ahead touchdown early in the 4th, but of course Tom Brady had to answer. Brady put together two drives and took the lead back with a score of 20-17 with four minutes left. Ryan Tannehill stood tall in the pocket and engineered a 14 yard touchdown hit to Marcus Thigpen but left Brady one minute of ample time to execute the last second magic he is known for.

An interception from backup safety Michael Thomas ended the comeback attempt by Brady and the game, making the Dolphins playoff hopes stronger than ever as they entered the final stretch of the season.

The Dolphins came out of the great win against the Patriots by losing their next two divisional games to the Bills and Jets.

While one could say that the bullying scandal is the ultimate of low points for any team, on paper, the loss of Johnathan Martin and Ritchie Incognito from the lineup didn’t affect much as they ended the season 5-4 with out them. They responded to the controversy by rallying together in an overtime game against the Bengals, yet followed by a beating from the winless Buccaneers. Consistency was not part of the Dolphins makeup in 2013. 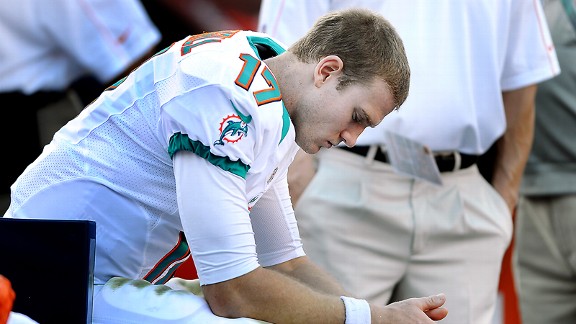 It almost made sense that the Dolphins, the Wildcard leaders holding on to their own destiny, would just find a way to implode when it mattered most. The Bills shut out the fish 19-0 in a game where Miami barely managed to put in 100 yards of offense, followed by dropping a game to the Jets in a 20-7 loss.

Doesn’t get much lower than 8-27 on 3rd down conversions in the last two games while Tannehill throws 5 interceptions in for good measure. Lets face it, the Miami Dolphins did exactly what “good” football teams don’t do at the end of the season.

Brent Grimes, a lets see what you can do player with a one year contract, proved that tearing his Achilles is something he could recover from in glorious fashion. All the worries regarding his injury history or weather or not he can be the same player he used to be fluttered away by mid-season.

Grimes put together 60 total tackles and 4 interceptions, including a pick-six against the Bengals. He is arguably the Dolphins most consistent player (Not a word i can use often with the Dolphins), filling the whole left by Dimitry Patterson.

Miami has more than enough money this off-season and i for one am glad that they chose to spend some of it by resigning Brent Grimes as they need to continue to build their often injury paged secondary.

In what was perhaps the silliest search for a general manager in recent history, Rookie GM Dennis Hickey will certainly have his hand full. The Dolphins brass had promised each and every candidate mountains of cash to get started in free agency, the problem was not many people wanted to go there.

Between management issues and behind the scenes dealings, the lack of accountability in the locker room and the leadership question in their best players, many look at the Dolphins as to how NOT to run a club.

The Joe Philbin era might be coming to an end sooner than later, but the root of the issues go deeper than the coaching staff. If owner Stephen Ross continues to surround himself by toxic suits who only wish to get a bigger salary and better title (cough-DawnAponte-cough), fans can expect the Dolphins to stay on the road toward mediocrity.

Depending on how free agency goes and how the new GM digs into the draft class the Dolphins might just get over the hump of an 8-8 season or end up in the bottomless pitt of mediocrity once again. The Dolphins have enough quality players in key roles that can help advance them to relevancy once again but the draft will be key. I for one think (hope) the brass has seen the error of seasons past and will decide to actually protect Tannehill. If that can manage protection and keep injuries to a minimum, keeping up with the patriots will not be a reach.

Tall Tails on the Buffalo Bills
First Down Morning Links