No sugar coating it the Miami Dolphins are in bad shape. Their current situation reminds me of the Balkans in the 90’s sans the killing, torture, displacement, genocide, etc. You have the government (the Dolphins) who has done bad things to the citizens (a bad football product, and bully-gate) and it finally had its tipping point (the performance vs. Tampa on Monday Night). The fan base is clearly divided. You have the rebels (Fireland fanatics) who want to overthrow the government (Fire Jeff Ireland) and crush anybody who stands in their way and shows any bit of loyalty (they do this by name calling and calling people who aren’t on their side their favorite word: zombie). Fireland fanatics also do things like show up to Davie to have a “protest” and hire airplanes to fly Fireland banners. Sometimes they cross the line by doing unethical things such as putting Jeff Ireland’s number on twitter for lunatics to reach. Then you have the loyalists who for some reason still support the government. Caught in the crossfires are the mild tempered fan who remains optimistic and has faith that tough times will pass. 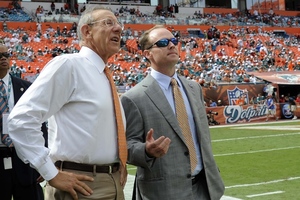 Both sides are completely wrong in my opinion. If Stephen Ross listened to Fireland Fanatics the Fins would’ve traded half of their draft for Orton, Kolb, or Tebow and then signed them to a 7-year contract worth over a 100 million with over half of it guaranteed. Loyalist also need to realize that Ireland is a bad GM. He’s a great scout though, he played a great part in finding the older core of the Dallas Cowboys (Romo, Ware, and Witten) left the Dolphins with some good building blocks (Tannehill, Pouncey, Miller, Clay, Matthews, Jordan, and Jones) but he cannot build a team.

I really hope that Stephen Ross does his homework, and listens to his committees when he plans for a future without Jeff Ireland because Firing Ireland without a plan would be downright stupid. Too many times this team thought that they had a knight in shinning armor that they thought would come in and make fans believe it was 1972 all over again. All those times the honeymoon period came to a screeching halt and lead to part of the fan base acting like an angry mob again. Ross should be focusing on find a way to stop this crazy cycle.