So what does it mean to be In Baltimore? Lets see…it will involve some forehead slapping, deep sighs and conspiracy theories involving Roger Goodell and his super secret weather time machine that can interrupt games. Yeah, welcome to Baltimore.

One of the hardest things to achieve in the NFL is consistency but still far from impossible. The Ravens are no strangers to it being that at a mere 20 years old, the have won two Super Bowls and have been to the playoffs more often than not. because of that short history, it is damn surprising to see the defending champions drop off as far as they did in 2013. Lets see how it all unfolded. In the first matchup of the season the Ravens met with division rivals, the Cincinnati Bengals. In that game, the Ravens almost squandered a 4th quarter lead that could of just all but doomed the season. Remember that AJ Green Hail Mary touchdown? That play looked like a game of 500 with a Foxtail more so than a scoring pass. That play took the game into overtime but Baltimore responded like they actually knew what they were doing.

The Bengals took the ball first and drove down to the raven’s 33 yard line. The Baltimore defense held and forced the Bengals into a situation where they chose to go for it on 4th down.  The Ravens defense stood tall and Justin Tucker ended the game with a field goal of his own.

Much like the rest of the AFC teams, the Ravens entered the last game of the season with hopes of a playoff spot and all they needed was a little help – win and the rest can play itself out. 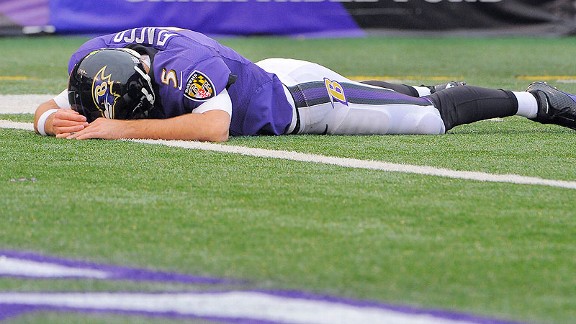 Unfortunately a spectacular 4th quarter collapse took all the dreams and hopes away. It was the microcosm of the Ravens season, the game was sealed by no other than Joe Flacco and his 22nd interception of the season. Picked off by Dre Kirkpatrick and returned for six point was the nail on the coffin. The Ravens lost 34-17 and the Bengals moved on to win the division possibly marking the game as the changing of the guard in the AFC North.

“Joe Flacco, you just won the Super Bowl and were rewarded with a hefty $120 million contract! What are you going to do next?”

“Turn the ball over thirty times!!!”

Obviously Joe Flacco is not the answer, believe it or not it is the kicker – yes, depressing as it might be when you have a roster full of athletic specimens it is the kicker that wins the vote. As much as Justin Tucker sounds like an IT guy telling you to “clear your cache” right before you square up to kick him in the jewels he is the MVP. 38 field goals, 33 consecutive, and about half of them made from at least 40 yards out – congrats Justin Tucker, now lets see you fade out into obscurity just like garrett Hartley.

When it comes to moving the ball up and down the field, it all starts with the offensive line coach and Castillo is just not it. Ray Rice’s production suffered greatly because of Castillo’s blocking schemes and served only to incapacitate the passing game. Look at the results, Flacco was incapable of throwing the ball deep and come on… look at the interceptions!

Unfortunately, Baltimore will keep Castillo. Lets just hope they keep him away from the defensive side of the personnel. You really don’t want that fiasco, ask Andy Reid.

This one is a tough one. Ray Rice will most likely get some disciplinary action apart from couples counseling for his TMZ debut. Other than that what changes will the Ravens make? Will Courtney Upshaw come to be the dominant force they desperately need? Will the Commissioner and Terrell Suggs finally stop pissing on each others cereal?

Well, even if the Ravens do improve in 2014, the bengals are right there asserting themselves as the top team in the AFC North. there is a chance at a wildcard spot, and usually where they are the most dangerous, but winning another Super Bowl is just not in the cards for 2014.

Bye Bye Byrdie: Where the Bills go from here
First Down Morning Links