That does it. I’ve had a feeling for a few years now that Bill Belichick has become bored with the monotony of coaching in the NFL and needs to find new ways to keep the game interesting. The singing of Darrel Revis to the New England Patriots last week proves my theory that Bill has progressed to controlling the league from the shadows like some evil puppet master (or Sith Lord, take your pick).

Last year when Revis was traded to the Bucs many of us fans jokingly speculated that this was the first step in bringing Revis to Foxboro- but that was all jokes, right? I mean Bill has strong ties to then Tampa head Coach Greg Schiano through Bill’s son’s time at Rutgers where he was allowed to walk on to the Schiano’s Scarlet Knights. Many have speculated that the Patriot’s seemingly incompressible picks of Rutgers players- like Duron Harmon in the third round- were just a “thank you” from Bill to Greg for letting his kid walk on. I however think there was a more sinister plot afoot. 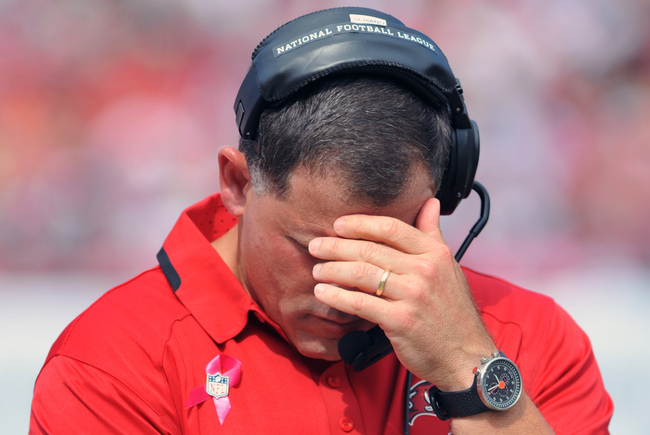 Bill was angry that the Jets knocked his Patriots out of the playoffs in 2010 and then hatched a plan for the ultimate revenge and poor Greg Schiano was just a pawn in the game. Once that loss happened Bill dispatched a loyal soldier to sign with the Jets (who can really tell who it was seeing as there are so many players that bounce back and forth between the two teams) to plant the seed of discontent in young Revis’ mind. Meanwhile Bill used his overwhelming influence to hoodwink the Malcolm Glazer into hiring Schiano- whom Bill had previously compromised by promising him an increase in recruiting status for his return to the college ranks (hence the wild drafting of Rutgers players).

Now right here you might be asking, “Why on earth would Schiano agree to be a part of this?” To that question I have two answers- 1.) Never underestimate the power of the dark side, and 2.) It is well known that Schiano had his designs on succeeding Joe Paterno as the coach at his alma mater Penn State and Bill probably promised him that job once he fulfilled Bill’s wishes (notice that another BB disciple Bill O’Brien kept the seat warm). So back to the plot.

Bill now had his minion in place in Tampa it was time to put the plan into action. Revis was good and disgruntled now playing for the Jets and the Tampa organization was so desperate for some positive news that they were more than excited to make an offer that new Jets GM John Idzik could not refuse (a deal that today looks like a real cagy move by the NYJ- something that should have been a red flag to everyone), so Revis was shipped on down the coast. Meanwhile Bill needed to test that the folks in TB were indeed under his spell, so he offered up a guy that had no business being involved in an NFL trade, seeing as he was at the time making news by informing the league that he’d rather try to win a gold medal in Rio in 2016, Jeff Demps to Tampa for a running back that was once a possible first round pick (and eventual playoff hero) in Legarrette Blount. Once that trade was executed and there were no eyebrows raised in the league offices or in the media bill knoew that it was safe to put his plan into action. He informed Schiano to smuggle a staph infection into the Tampa locker room, misuse Revis, and generally act like an incompetent coach. This resulted, as Bill knew it would, in Schiano’s firing, Revis’ discontent, and the need for a complete team rebuild in Tampa. Meanwhile, Bill watched from afar and sent other puppets to plant images in Revis’ mind of all the success and glory that he would see if only he could find a way to play in New England.

Then the 2013 season ended, Schiano was in fact canned and Revis was to be found complaining about the direction of the Tampa Bay franchise just as bill had planned. Now, no plan, not even one designed by a Dark Lord of the Sith could be completed exactly as planned. Bill was not able to get Revis via trade. I assume that his mind control techniques are less powerful without an apprentice in the building, so the executives in Tampa were not inclined to take a 7th round draft pick in 2024 for him and he was cut. Bill of course had a contingency plan and was easily able to bend the will of both Revis and his agent and get a deal signed before dinner the day he was released. Of course, Schiano did not get the head coaching job at Penn State and is now left wandering the streets late at night wondering what in the hell just happened to his life. Well sir I have an answer for you- The dark side gets what they want through tricks and lies, you were never in the running for that job.

There you have it, the evidence is clear, Bill Belichick has seized control of the league (we’ll probably be calling it the “National Football Empire” in a few years’ time) and there’s nothing anyone can do about it. As a Pats fan Ii am excited that Bill now has this level of control. He’s also now in possession of Rex Ryan’s former favorite toy (precious?), which really has to go up Rex’s now slimmed down backside at an uncomfortable angle. Now that he’s done with Sciano’s hollow corpse, it appears that he has moved his gaze to the Eagles where his next pawn, Chip Kelly (how else to you explain the Barkley pick?), is now in control and is already taking calls on his best player.