The Raiders make us fans giggle, the Bills can’t help but make us chuckle, we snicker at the Jaguars and the Titans make us say “who?” ( Seriously, does anyone remember anything about the Titans?). But if you want the show stopping laugh, the almost inescapable guffaw, the ultimate death by laughter effect, go no further than the Cleveland Browns. Now fans, don’t get upset, even you must know that there is just something wrong in Cleveland from top to bottom.

This season was very much like many others of late where the factory of sadness hosted some low moments and then some even lower moments. At one time the Browns were near the division lead, and even after week one to boot, but they fell apart and ended the season with seven straight loses.

As it turned out to the dismay of many Cleveland fans, the regular season was just an opening act to the real headliner of the year. The front office shuffle that had a first year coach fired, a month long coaching search that was rejected by many and to top it off the General manager and the CEO left the team due to the bleak outlook in front of them. The Browns, much like the past several years, stand at a crossroads with no map, all paths seem to lead to doom so lets just hope they find their way before the draft.

The Cleveland Browns celebrate after defeating the Buffalo Bills during the first half at FirstEnergy Stadium on October 3, 2013 in Cleveland, Ohio.

A prime time spot on Thursday night brought together the 2-2 Browns against the 2-2 Bills, a yearly rivalry that has pitted legends like Derek Anderson and Trent Edwards against each other. However, heading into this game, an aura of hope surrounded the Bills while they enjoyed their rookie quarterback EJ Manuel and the Browns had possibly found their signal caller in Brian Hoyer. Of course, both quarterbacks left the game injured but that is not the highlight. The true highlight is the fact that the Browns managed to score 37 points on a very solid Bills defense, scoring 20 unanswered points in the second half to go ahead. It might not have helped matters that some fool in the Bills staff let Jeff “The Teul”  play football, but at the end, the Browns were 3-2. For the sake of the Browns fans i will not even mention the remaining eleven games. 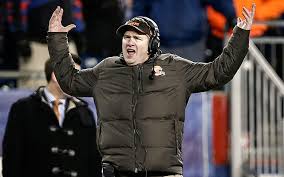 Like i mentioned earlier, the offseason was no picnic for the Browns and with not many prospects on the line for the head coaching job, they gave it to Mike Pettine. Lombardi and Banner left a team in such disarray that it is hard to point out any football game as the lowest of the low. But the month of February brought us a nugget when rumors began to swirl that the Browns offered San Francisco draft picks for coach Jim Harbaugh and it seemed quite possible until Jed York (Niner’s CEO) finally went on the record stating:

“The Browns reached out to me, and we had no interest in pursuing it.” Lets just say it wasn’t Brandon Weeden and leave it at that. But if i must throw out some names into the mix, Joe Haden can make the cut as well as the not so glamorous OT position holder Joe Thomas. But the truth is, i really can’t come up with a clear recipient of the award and it’s not just me, really it isn’t. I mean, even the Browns fans themselves seem to have a difficult time zeroing in on a candidate as the Browns website suggests. So on that note i think i will bow out from naming an MVP on this one.

I really don’t have to mention this but the answer cannot be any simpler – a quarterback! A running back and secondary help would not hurt but a team needs to be built around a solid man under center. Luckily for the Browns they have five picks in the first three rounds of the draft, so maybe that can fill all their needs there.

I just have a feeling that Brandon Weeden will start at least 6 games in 2014 again and naturally that is bad for the franchise. The AFC North was pretty weak in 2013, but Pittsburgh and the Ravens are a lot farther ahead than the Browns in both players and consistency. I see the Browns getting to 5-11 but could easily surprise us all if they draft and hit the jackpot with a quality quarterback.