Codarrelle Patterson – Returning a kick off against the Green bay Packers

Many draft pundits believed that the Vikings reached with this trade and selection for an unpolished receiver and essentially a first round “project”. At this point in the NFL season, they would be correct, but Patterson’s playmaking ability and potential is undeniable. He is the #1 ranked kick returner on PFF with 22 attempts totaling 808 yards and 2TDs, for an incredible 36.7 yards per return average, most likely putting him on pace for an All-Pro selection at the position. Explosive and extremely elusive are both understatements for this talented young player.

On the downside, the draft pundits were correct in that Patterson is a project at the receiver position. To this point he has posted a disappointing 14 receptions, 146 yards, 0 TDs with only one catch over 20 yards for a receiver needy Vikings team. Having played only 129 of 508 snaps, 25% of the Vikings O snaps, Patterson has seen an increase in playing time recently and could be poised for a breakout second half if the Vikings QB situation can stabilize. 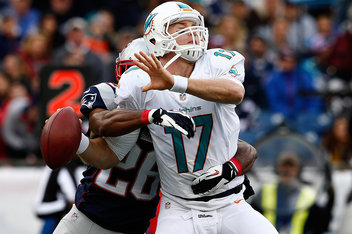 Jamie Collins was a surprise with 52nd pick in the draft, many saw him as an athlete who played against weak competition on a winless Southern Miss team. To this point Collins has mostly only had a special teams impact as he has only played 94 of 671 (14%) Patriots’ defensive snaps. Not all is lost for Collins though as he has graded out as PFF’s #3 special teams performer in a time when the Patriots were missing special teams ace Matthew Slater.

Logan Ryan to this point has been the greatest gain from this trade. With the injury to Aqib Talib he has stepped in during recent weeks and come up with big plays, including a pick-6 in Atlanta and a timely strip sack of Ryan Tannehill. While still early, the future looks bright for this Rutgers CB, and dare we say another successful BB DB pick?

Not much to write on Josh Boyce, he has been a healthy scratch the last 4 weeks and only played 56 of 369 (15%) snaps when he was active. Boyce has a meager 1 reception on 6 target for 24 yards and no TDs. It remains to be seen where Boyce will fit on this Patriots squad, but there appears to be little spot for him at the moment. If the mid-season signing of Austin Collie is any indication the coaching confidence in Boyce has not been high anyway. Very easily may turn out another BB WR bust.

Lastly the trade for Blount, which to my surprise has worked out surprisingly well. It is still extremely painful to watch him barrel out of the end zone while returning kickoffs, but there is something refreshing about a guy that never wavers from a north-south strategy (boy I hated Maroney). Jeff Demps has done everything that everyone has thought he would…nothing. While Blount has a semi-rejuvenation in New England averaging 4.5 yards per carry and finding the end zone twice. It will be interesting to see how he is utilized after the bye when both Ridley and Vereen are on the field.

Conclusion: As expected, it is too early to tell who won this trade. Both teams appear to have gotten useful pieces for their franchises. And no one can be considered a loser in this scenario at this point. The second half growth of these players will be interesting to watch.