There’s only one NFL game left this week and it should be a great one. The Carolina Panthers [6-3] are coming in after a gritty win against the San Francisco 49ers. Carolina is riding a five game winning streak and is getting some buzz nationally, primarily on the defensive side. The New England Patriots [7-2] are coming off a much needed bye week and, before that, a rout of the Pittsburgh Steelers. Here’s what I’ll be watching for tonight.

When Carolina has the ball

The Patriot pass rushers, especially on the outside, need to be disciplined to keep Cam inside the pocket as much as possible. He’s dangerous with his arm but I’d rather make him use it than watch DBs try to tackle him 1v1 on the outside. This should give him a little more time to throw, but I’m fine with that. You can’t have everything against such a versatile threat. The plan was similar against Roethlisberger two weeks ago but it’s even more crucial to execute it this week.

Only 4.7% of the Panther’s completions have been 20+ yards downfield but those have accounted for 38.5% of their passing TDs. Steve Smith and Brandon LaFell will make plays, but it’s up to the defensive backs to deny them over the top. The Patriots secondary has only given up 3 passes of 40+ yards this year, good for 4th best in the league, and a large part of that has been the play of Devin McCourty. He has been the best deep safety in the NFL this year and he’ll be a key factor in tonight’s game. 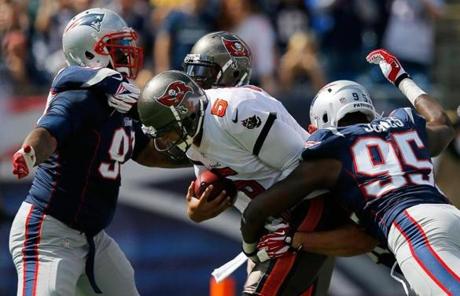 Chandler Jones will be relied on heavily, often matched up against the Panthers best o-lineman, Jordan Gross. While I expect Gross to win in pass protection for the most part, Jones needs to win in the running game. Carolina does their best work running left, especially with Hartsock as an in-line TE. I’m confident that the Pats will be able to stop the run, but at what cost? Will they have to send Spikes hard at the LoS every snap? Will Hightower be able to jam RBs and slot guys or will he need to support the rookie DTs off the snap?

If the secondary is focusing on stopping big plays, and the LBs are forced to help in the run game often, there will likely be big holes for mid-range routes. Look for 1v1 coverage on Olsen most of the game. Combine this with more time in the pocket, because of the containment focused pass rush, and you have the ideal scenario for crossing routes. Normally you’d want a strong push from the DTs to make the QB move his feet, but that could result in losing contain of Cam. As you can see, it’s really going to take a solid overall defensive performance tonight.

Carolina leads the league with their average drive taking 3:19 off the clock. They do this in spite of being outside the top 10 in yards per drive [11th, 32.19] and ranking near the top [3rd, own 30.56] in starting field position. A big part of this, as Belichick mentioned on Friday, is that they run the ball on 3rd down more than anyone. This slowly takes a toll on the defense, and that’s huge with an offense as powerful as CAR’s. Newton and Tolbert are big boys and tough enough to tackle when you’re well rested. Trying to take them down when you’re winded leads to missed tackles and big plays. The Patriots front seven isn’t very deep right now so they need to win early in the game on 3rd down.

When NE has the ball

They have a talented o-line, but with Vollmer on IR, most of the talent is over on the left side with Solder and Mankins. Solder has been a beast all year. Mankins started out great but it looks like he’s been battling injury over the last month. Hopefully the bye week helped because the Panther’s d-line is nasty. Cannon has been surprisingly good in pass protection since stepping in as a starter. His run blocking has been weak so look for power runs to go left most of the time. We’ll still run some stretch and zone plays to the right, but mostly to set up play action. Wendell and Connolly needs to pretend it’s 2012 and 2011 respectively. If they play like they have in 2013, it could be @CIN or @NYJ all over again. Brady has already been sacked 26 times through nine games, as compared to 27 times through 16 games last year.

It’s basically the same point as above but these guys deserve their own paragraph. Star Lotulelei is a top DRoY candidate and has been a force against the run. It’s going to take a combined effort on the inside to slow him down. On the outside we have two great strength vs strength matchups. Charles Johnson vs. Cannon will often determine how much time Brady has to throw. On the other side it’s Greg Hardy vs. Solder, and this will be a fun one to watch. Solder is ranked by PFF as the 2nd best OT in the NFL, and is in the top six for both pass and run blocking. Hardy is the 5th best 4-3 DE [per PFF] and in the top eleven for pass rush and run defense.

Vereen is likely to be back from IR this week. That’s key because Ridley and Blount are the type of RB that CAR wants to see. With Vereen, and Bolden to a lesser extent, we can attack the edges much more effectively. I’d love to send Vereen on wheel routes all night, with Rob Gronkowski going up the seam. Let’s make Kuechly turn and run if possible because he’s so instinctive when the play is in front of him. He’s also our best option in the screen game and the hurry-up, both of which should be featured. We need to make that d-line run as much as possible, and use their aggressiveness against them.

The primary reason for the Panther’s turnaround is that they’re taking care of the ball better. Carolina is currently +8 in turnover differential and NE is +9, both of which are top 4 in the league. Neither team can afford to give the ball away this week, especially not the Patriots in a hostile environment. Fast start. It’s Monday Night Football [in a stadium that hasn’t hosted a prime time game since week 3 last year], Carolina is currently in playoff position after a five game win streak, and the Patriots are coming to town. On top of that, the Panthers will be wearing their black uniforms and have asked their fans to wear black for the “Blackout” too. Carolina’s defense has basically blanked opposing offenses in the 1st quarter this season. They have allowed 6 points on two field goals, but they scored a TD of their own on an INT return. If the Patriots let this pattern continue, the fans will only get louder as time goes on. Explosive plays are the fastest way to quiet the crowd but they won’t come easy. We’ll see how aggressively the Patriots attack, on both sides of the ball, on the opening drives.